me, thinking out loud by Jon Shriver is licensed under a Creative Commons Attribution-NoDerivs 3.0 Unported License.
Based on a work at www.jonshriver.com.

I love a good argument. 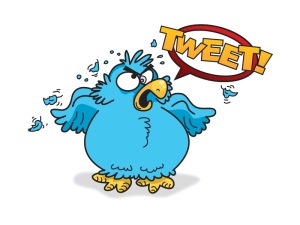 Mind you, I would run away from a fight as fast as I could in real life. But, while I flee in haste when any type of confrontation arises, it’s a different story on Twitter.

This hit me when I was scrolling through my Twitter feed the other day. I had chosen to argue with a well-known controversial Australian political figure. He sided with Aussie Rugby start Israel Folau and argued that we must have legal protection so people like Izzy could safely tell every LGBT person that they’ll burn in hell forever without threat of reprisal (in his case his multi-million dollar contract being torn up).

I asked him if he would afford the same freedom of speech to a Muslim person who advocated jihad against Australian ‘infidels.’

His response to me: ‘You’re an idiot.’

I looked at his feed and saw that several hundred tweets had protested his false logic and I was so tempted to strike back with some smart, well-thought-out response.

But it was then that I realised that here was an immoveable object and our collective tweet-attack was like an unstoppable force.

He wouldn’t budge an inch.

We wouldn’t let up.

I concluded that Twitter is great to let off steam and offers a chance to find like-minded haters in the fight for right. But, as far as actual change goes, it is a rather ineffective and useless tool.

Contrast that with the work of David Fleischer of the Los Angeles LGBT Center whose work has been to change people’s minds regarding LGBT inclusion. His work method has exploded on to the scene since his appearance on the public radio broadcast This American Life.

He comes from a place of awareness that it is a very rare thing to change someone’s mind simply by a well-crafted argument or by logical thinking.

I recently listened to an interveiw he did with HumanizeMe’s Bart Campolo. Using the Californian Prop 8 referendum as an example, he demonstrated how all manner of logic and emotion was thrown at the people of the state to convince them that marriage equality was a proposition worthy of their ‘Yes’ vote.

He and his team went back to the drawing board.

In their work of evaluating what went wrong, they studied on their method of canvssing the general population and revisited electoral districts that had overwhelmingly voted against marriage equality–this time using a different strategy: one of connection. Rather than bombard the resident with facts and appeal to their sense of justice, the canvassers tried a different approach: having a comnversation with the person and drawing out from them their story, building trust, and then sharing their own story in such a way that it relates to that person’s own emotional connections and relationships.

Using the new technque, they were actually able to convince far more people that marriage equality was something worth considering based on the new relationship they had formed.

Essentially, Fleischer discovered that prejudice can be overcome with relationship built in a non-threatening way using conversation.

I have read accounts of the same thing working in conversatons between African-American folks and KKK members, between youth and the elderly, between Christians and Muslims, and between Israeli and Palestinian people.

What Israel Folau, Mark Latham, Lyle Shelton, Pauline Hanson and others like them must come to realise is that it’s only in the context of relationship and connection with others that trust can be built in such a way that people begin to understand you and your message. No bashing-over-the-head-with-a-Bible can build consensus in anywhere near the same way as a heartfelt, sincere comnversation that addresses underlying feelings, emotions and experience. Our stories are so different, but in them is a point of intersection where we can agree and connect and understand each other.

I’m all for dialogue. And yet I let my need to be right get in the way too many times. My first thought was to delete my Twitter account and start again. But when I had time to collect my thoughts, I realised that I don’t need to be part of that unstoppable force that expends its energy trying to shift that immovable object. I can back away from the comments section. I can refuse to scroll. I can, instead, ask sinecer questions about folks and their closely-guarded beliefes and, somehow, I may be able to make some small difference. Twitter is full of angry people. Maybe we need to become an unstoppable force of kindness that, as kindness often does, breaks down piece-by-piece seemingly-immovable objects.

I am an ordinary man, living an extraordinary life with my wife and partner-in-greatness, Vicki. We have two amazing kids who are living incredible adventures of their own. I enjoy most things I do, but especially coffee, the beach and a good read. My opinions are my own. View all posts by Jon